One of Sierra Leone’s top emcees Terror D and Nigerian artist Solidstar are set to thrill the Mic City fans in a nationwide music tour in April. The Australia based Sierra Leonean rapper and CEO of Mic City – Daniel Kamara popular on stage as Terror D will be joined by his Nigerian counterpart – Solidstar in Sierra Leone. The African duo has done a dope joint in 2017 titled as ‘LEVELS’, winning several awards (Best Music Videos and Best Collaboration) for that song.

Terror D is one of the most consistent Sierra Leonean rappers in recent times. He has maintained a sustained trend in making hit songs and classic videos. Other prominent hits released recently include ‘Winner’, ‘Body Is A Must’ featuring Nigerian rapper – Ice Prince and more.

Ahead of his planned ‘Sierra Leone Tour‘ with Solidstar in April 2019, Terror D has already released a major hit (Your Body) that is currently making impacts in Africa and beyond.

The Mic City Movement (MCM) are currently on massive branding and publicity hunt ahead of its planned ‘Salone Tour’. Music fans across the country are anticipating this one in a million crusade. 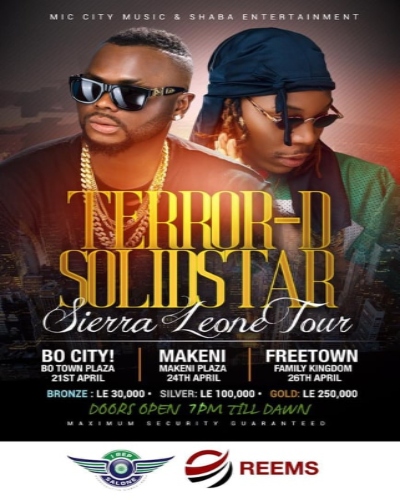 KELVIN DOE, 21 YEAR OLD ENTREPRENEUR WHO WAS DISCOVERED THROUGH THE...