Introduced in Sierra Leone under one year ago, the acrobatic sport is one of the world’s unique sport, captured by en-thrilling anxiety from fans watching its spectacular dynamics by athletes performing it.

The Sierra Leone Gymnastics Federation (SLGF), with a dream of making acrobatic a name among the nation’s most interesting sport, has on Tuesday, 30th April, 2019 started the popularising process of the acrobatic sport with a one day seminar with the theme, “Acrobatic for Development” at the Bo District Council Hall on Sewa Road, Bo.

General Secretary of the Sierra Leone Gymnastics Federation who doubles as the seminar chairman, Solomon Parsons, greeted Physical Education Teachers, Pupils and the general attendance with the warm love from the Gymnastics family. He said, its an opportunity for people  of Bo District and the Southern Region as a whole to be the first to know and get acquainted with the acrobatic sport.

He further employ them to embrace this opportunity in good faith while he continued to explain the unending opportunities and benefits the sport will in turn bring to them.

Mr Sesay continued that, he is in the event to represent his boss, the Minister of Sports, Honourable Ibrahim Nyellenkeh.

“Acrobatic is one of the most powerful entertainment sport in the world”, he said. 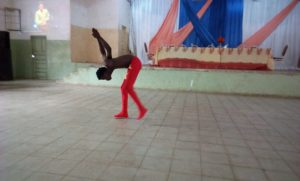 He explained that, despite his presence in the hall was to discuss acrobatic, but emphasized sports in general has taken a different dimension in the country referencing the recent heroics from Volleyball, Boxing, Cricket amongst other sports. He called on the people of Bo to embrace acrobatic as a sport which he believes, is a unique sport to develop not only Bo Town, but the Southern Region as a whole.

“Physical Education teachers across various schools should embrace acrobatic and help in it popularisation”, he asserted. Adding that the ministry of sports under the leadership of Honourable Ibrahim Nyellenkeh intends to organise a sport festival which will cater for all of the nation’s traditional sports.

President of the Sierra Leone Gymnastics Federation and founder of the acrobatic sport in Sierra Leone, Madam Hannah Williams said, few years back, she went to China to study acrobatic. After gaining the knowledge of acrobatic, she had a dream of making Sierra Leone recognized amongst nations that have earned notable reputation from acrobatic.

“I came back and later took ten (10) children to China to learn acrobatic, a result the whole country is presently proud of now” miss Williams explained.

“Acrobatic is the most pivotal sport amongst other disciplines in China.

She further highlighted her dreams for acrobatic, which she said is to make it fit among the most popular in the country.

“Sierra Leone and China are in a good relationship, China has a great aim of promoting acrobatic sport in Sierra Leone”, she intimated.

Chairman for youths and sports in the Bo District Council, Mohamed Kallon, expressed his positive impression on the Sierra Leone Gymnastics Federation. He said sport is life and a paramount aid to human development.

“On behalf of my chairman and the entire Bo district, we warmly welcome the acrobatic sport in our district and asked on the people of Bo to embrace and help the sport known”, he continued.

Plans to officially launch the acrobatic sport in Sierra Leone in June, 2019 was also revealed, after which the Federation will try to make acrobatic play anywhere and everywhere in the country.

Spectacular performances by acrobats from the federation stunned participants who were overwhelmed by their gimmicks.

At the end of the seminar, an executive which is tasked with popularising the sport and being Gymnastics sub regional body was formed to oversee activities of the federation in that part of the country. 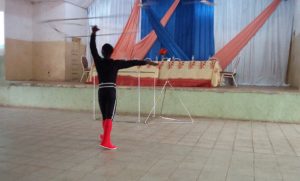